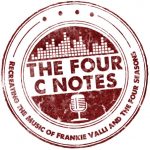 THE FOUR C NOTES are the Midwest’s ONLY tribute dedicated to recreating the music of Frankie Valli and The Four Seasons! While they call Chicago home, they have been seen at private events, performing arts centers and outdoor festivals ALL OVER THE COUNTRY!

Four guys, smart choreography, and Mr. Coppola’s legacy with the Frankie Valli and Four Seasons catalogue give THE FOUR C NOTES an authenticity to their performance that similar tribute groups simply cannot match…ANYWHERE!